Lighting as a service to enable circular economy 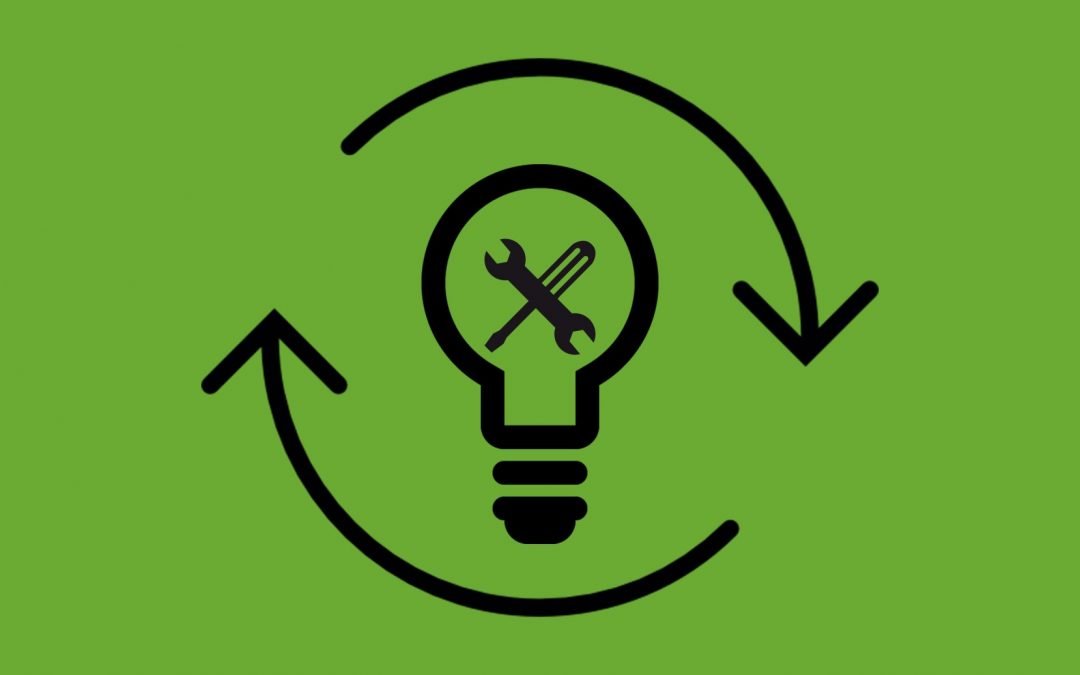 The lighting industry has seen huge change in the last five to ten years. Whatever your views on the legitimacy of LED lifetime claims, customers are making the switch to LEDs and they are lasting at least long enough to effectively wipe out the lamp resale market. Whilst many manufactures have struggled with the switch, others such as Osram have got out of the lamp business altogether to focus on high growth technologies.

The vast majority of halogen lamps have now been banned, with most others set to follow suit in the coming years. The halogen ban is proving to be both a blessing and a curse however, for those looking for environmental benefits at least.

As well as presenting manufacturers with an opportunity to replace old inefficient products with new energy-saving models, the ban is having a knock-on effect on other products and industries. The drive for change means the life of old, perfectly viable products is being artificially shortened, creating an immense amount of product wastage. As I mentioned in my blog LEDs: the myth vs reality, what happens to products such as touch dim lamps that aren’t compatible with LEDs?

It’s not all doom and gloom though, there are opportunities to save and promote a circular economy within the lighting industry. The Internet of Things (IoT) for example, opens several avenues of opportunity for the lighting industry, and there is also Lighting as a Service (LaaS). In my previous blog I touched on how we, as an industry, are failing to meet the requirements of the circular economy. If we are to reverse this trend and get back on track, LaaS could be crucial…

What is Lighting as a Service?

LaaS is a fairly simple concept in principal, manufactures install, maintain and operate lighting systems with no upfront cost for customers.  With the savings made on energy bills and the upfront cost of the products and installation, the end user should easily be able to afford a lighting system that exactly meets their needs.

Pioneered by Philips and architect Thomas Rau, the LaaS model has been rumbling along in the background for a number of years now, but it has so far failed to take off.

The benefits of LaaS for manufacturers

As the latest figures released by CSIL show that more than 80% of all lighting sold in the EU in 2017 was non-serviceable the cynic in me might suggest that after LEDs decimated replacement cycles of lamps, the rise of sealed in fixtures is a way for manufactures to claw back some much-needed income.

The onus would be on manufacturers to ensure serviceability and that raw materials return to the economy and not landfill. A complete 180 degree about-turn compared with the current outlook of some manufacturers.

The benefits of LaaS for end users

LaaS provides end users with an opportunity to implement the latest technology without the huge upfront cost normally associated with such endeavours.  Service, as the name would suggest, means manufacturers will be forced to compete to provide the very best performance to the end user. With LaaS, it would also be in the manufacturer’s best interest to provide products that last, and responsibly manage the ones that don’t.

End users that have been slow to adopt LED thus far due to high initial investment costs will be able to reap the benefits of reduced energy usage and bills, providing both a boost to their finances and to the planet.

LaaS may also provide an incentive for building and company owners to think carefully about a number of their practices – one of my biggest pet hates is seeing an empty office shining brightly at night with no employees anywhere to be seen.

At this stage, we don’t know whether it will be Zigbee, Zwave, Bluetooth or one of the many other protocols that corners the IOT lighting market – but LaaS consumers won’t suffer regardless of who wins, as their lighting service provider would be responsible for replacing any defunct equipment.

We could have saved ourselves a lot of trouble if Video-as-a-Service had been around at the time of the VHS/Betamax wars.

LaaS and the circular economy 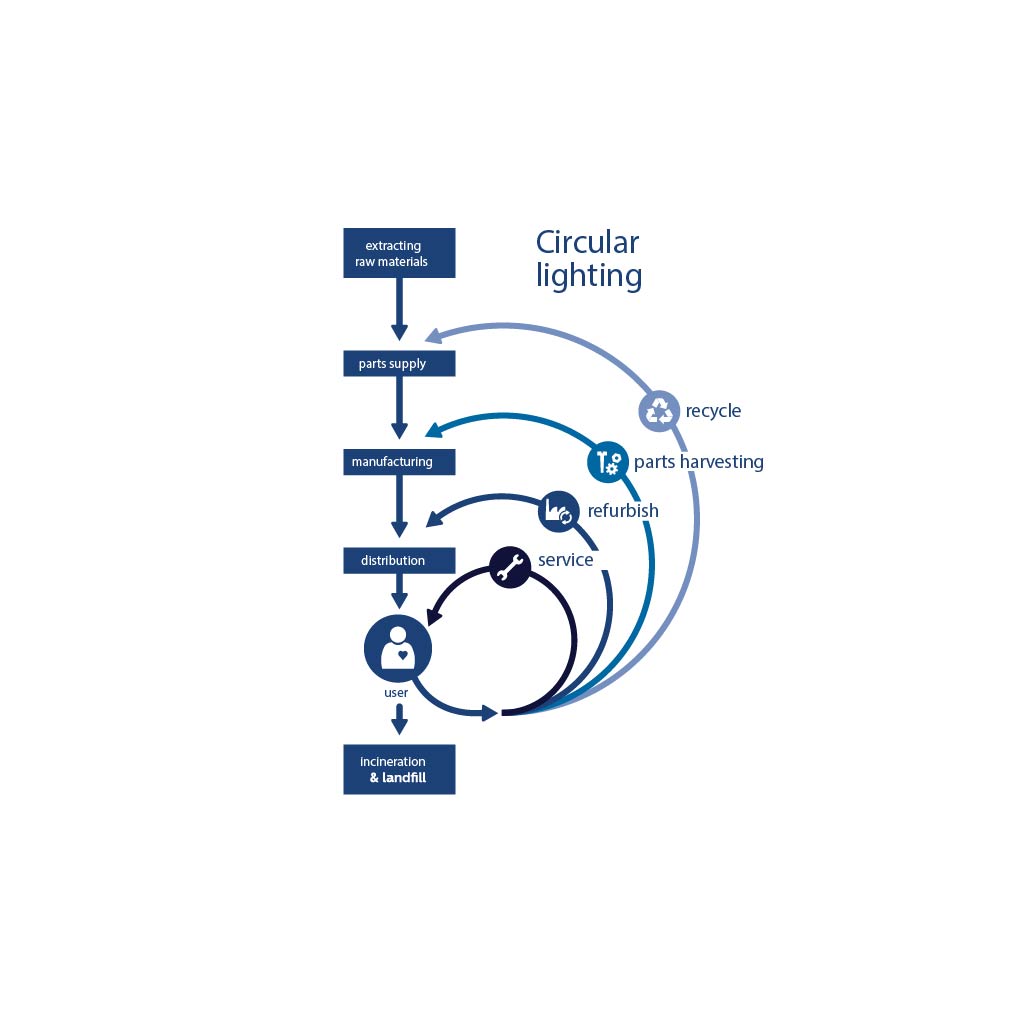 Lastly, the Lighting industry as a whole will be the real winner if LaaS sees a growth in adoption, as it will necessitate a move to a truly circular economy.

As consumers, we are all too often guilty of ‘throwing the baby out with the bathwater’ when it comes to lighting – understandably so too. After all, what use to us is a light fitting that is no longer compatible with our expensive new LED lamps?

However, once the impact of throwing away, rather than reusing light fittings or lamps is felt on a manufacturer’s bottom line rather than the conscience of individual consumers, policies will be put in place to make a change.

Manufacturers themselves will make money by ensuring their fittings are easily serviceable, and lamps last as long as advertised.

Modularity – whereby fittings are made with replaceable parts, can also be utilised by manufacturers as a means to reduce waste, and costs. Without LaaS though, modularity is impractical as consumers would lack the expertise to replace ‘parts’ of fittings whilst the cost of developing modular fittings may be prohibitive to manufacturers.

In my previous blog I mentioned the new Ecodesign regulations which will require so called ‘containing products’ to effectively be disassembled without permanent damage to the containing product by independent repairers. The modulatriy of LaaS would help manufacturers meet this requirement.

One only needs to look at the forward-thinking Schiphol Airport for an example of LaaS working in practice. Hopefully, by the time their 5-year service agreement ends, many other such venues will have followed suit.