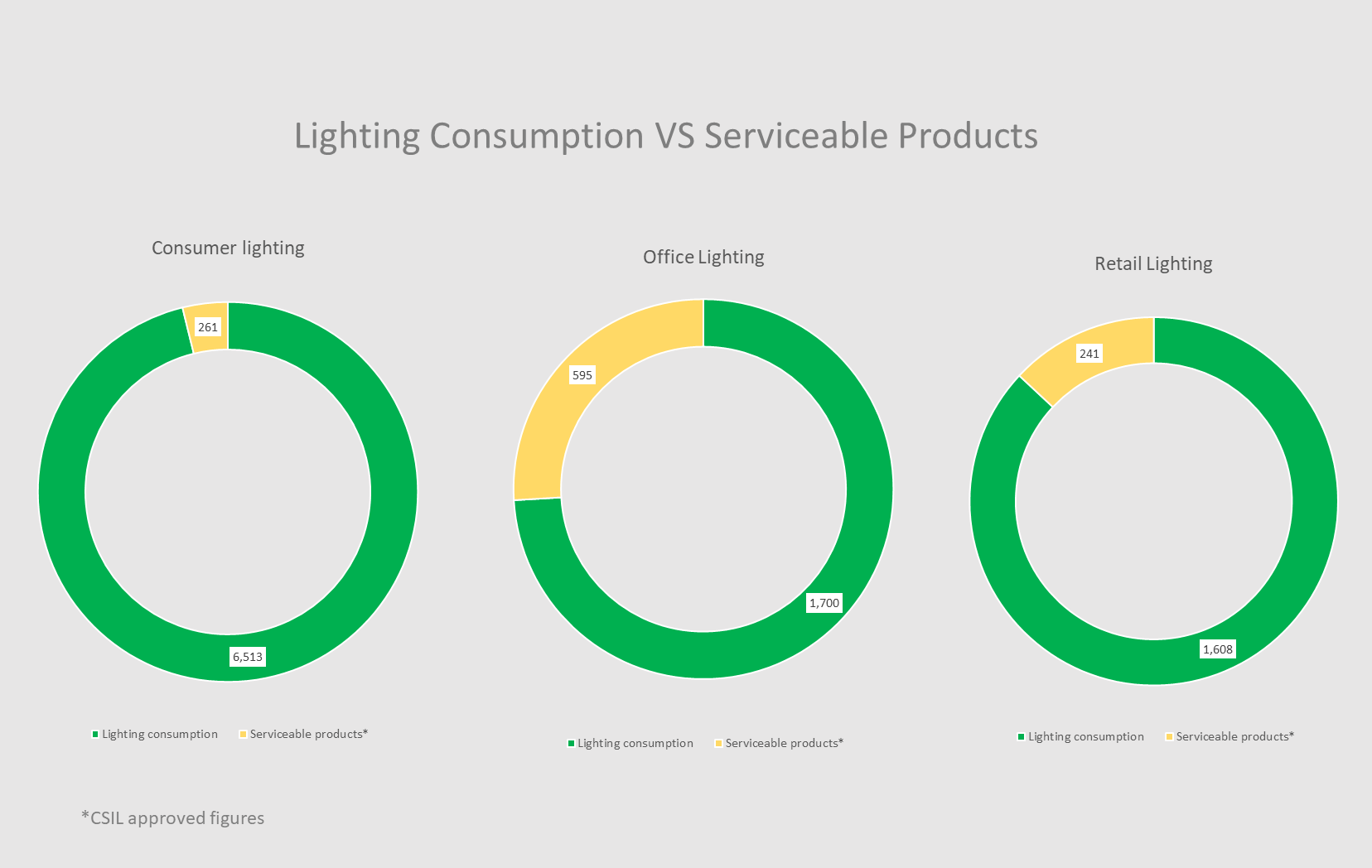 A recent industry survey by CSIL (R3362 Nov 18) based on 2017 lighting consumption in the EU has some quite surprising numbers, for example the largest sector is consumer lighting where it is estimated only 4% of products sold were serviceable and overall it is estimated it was about 17%. This means more than 80% of all lighting sold in the EU in 2017 was not serviceable which is staggering, very wasteful and materially inefficient.

It is also known that the largest growth sector is sealed-in LED products for the volume market in technical wholesale and consumer lighting, so the situation is getting worse.

The reason the end users have not yet reacted negatively to this is the relatively long life of LED products so many today are still using their first purchases. There is also a common misunderstanding of lifetime quoted, for example, a typical claim of 25000 hours should represent many, many years of normal use but this actually means half of the products might have failed by the time 25,000 hours is reached. IEC 62717 Annex C explains that unless otherwise stated an L70 lifetime claim implies F50 which means only half the products need to be working at all at the lifetime claimed and those that are, must have more than 70% of their initial light output. Furthermore, it would be helpful if the IEC Technical Committee on lighting (TC34) also investigate ways of improving accelerated lifetime testing techniques that can support lifetime claims which are way beyond the current Ecodesign survival requirement at 6000 hours. This requirement is just to prevent premature failures not define the required lifetime (the latest Ecodesign further redefines this as endurance at 3000 hours with 1200 switching cycles).

Of course, early failures can be replaced more readily, probably under warranty while the product is still available. The reality is more significant failures will occur after half the rated life when it is likely the product will no longer be available, at this point what will the end user do? There will be no warranty and the most likely option will be to replace all the products, even though many will still be working. This is starting to happen in commercial lighting already where duty cycles are much longer and failures occur sooner.

There will be a kick back from end users very soon as the high cost of replacements hits their pockets and it is realised just how wasteful this is. 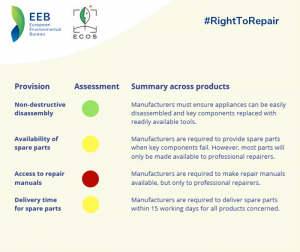 Serviceable products for repair and reuse must be regulated in order to avoid this and we expect the new Ecodesign regulation to require so called ‘containing products’ to effectively be disassembled without permanent damage to the containing product and also by independent repairers. Until such requirement comes into force, we will continue to see waste. ECOS has a proactive approach to this by promoting the #RightToRepair for end users to put pressure on suppliers for a more sustainable approach.

There is also a hidden advantage of repairable product since this means older products can be upgraded to the most efficient technology and it avoids the so called ‘lock-in’ effect with sealed-in less efficient technology. The rate of improvement in LED efficacy though slowing is still increasing by 5 lm/W per year and more importantly the higher efficacy LED are getting more affordable. One can imagine complete installations being upgraded with minimal waste in this way. Repairable product is not enough in itself, they must also be durable to avoid the need for frequent repair which is also wasteful.

One ramification of making products both serviceable and durable is that the upfront cost is higher, which is why we see more of such products in higher end applications (and in the volume market very few) so this makes regulation critical to level the playing field. The long-term cost will be less, the old adage ‘if you buy cheap you buy twice’ is exactly the point. The benefit to the environment is clear, we must move away from a throw away mentality but there is another; serviceable products will create a local service industry and employment in the long term.

Serviceability is also a matter for standardisation development organisations in lighting who up to now have been primarily concerned with the safety and performance of lighting products. ECOS believes environmental issues must be better integrated into the provisions and specifications in the standards. For lighting a way forward could be to establish an Advisory Group within TC34 of the IEC on environmental concerns to advise all the working groups on how best to standardise performance criteria for sustainable product with the goal of a circular economy. Points of principle on serviceability and durability must be established to drive the whole standardisation process consistently, it cannot be left to the working groups to add criteria ad hoc.

As serviceability is taken seriously there is also an opportunity to make sure every component used is recyclable to further reduce EU consumption of natural resources and work toward a circular economy.

As liaison for ECOS at IEC TC34 on lighting I value their position on this issue and it is worth noting that ECOS are working towards making the circular economy a reality not just a political goal and there is useful material on their website.